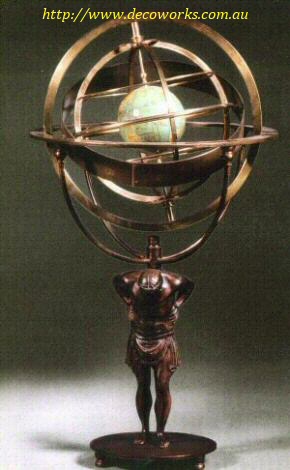 The reference for the Atlas statue and armillary sphere in Opera Australia's 2003 production of Otello was a photo (right) of an 18th century bronze statuette provided by the designer Hans Schavernoch.

From this photo David Wilson drafted a drawing of the armillary sphere and statue using CAD and then scaled it up to 2.5 metres in diameter. These plans were then used to build the individual rings and supports. This style of demonstrational armillay is used as a basis for a range of smaller armillary spheres built by DecoWorks to be used as garden features.

The finished statue and armillary sphere stood 4.5 metres tall and stood centre stage on a staircase. To prevent the statue swaying when performers walked on the staircase it was attached to a steel framework which went through the staircase to a castored frame on the stage floor. This isolated the structure from any movement on the staircase.

An armillary sphere (from the Latin "armillae", or bracelet) is a representation of the celestial sphere with the Earth at its centre. It was used by ancient astronomers to describe the motions of the stars and planets relative to the Earth. Their use and development had reached a zenith during the Renaissance. In the seventeenth and eighteenth centuries the armillary sphere was more than ever a necessary accessory for the study or library of a gentleman.

Two colure rings are fixed at right angles to each other which form a skeleton sphere around the central north/south earth axis. Around the middle of the colure frame is the equatorial ring which represents the equator of the Earth. The tropic rings are located 23.5 degrees above and below the equatorial ring. Similarly 23.5 degrees fron the north and south poles are the polar rings representing the arctic and antarctic circles.

Around all these rings lies the ecliptic ring which traces the apparent path of the Sun and planets across the sky. The constellations that the Sun appears to transit on its journey is known as the zodiac and the ecliptic ring is usually divided into its twelve signs. There are actually 13 to be strictly correct - Ophiuchus is usually omitted. Supporting these armillae is a vertical ring called the meridian ring which is divided into 360 degrees. This in turn sits inside the horizontal horizon ring. The whole structure is supported in a fixed cradle. Early armillaries were often hand held and didn't have a cradle. 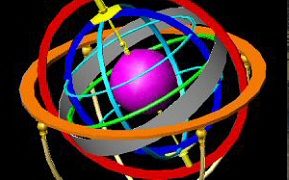 This 3D CAD drawing was drawn using the 2D drawing made from the supplied reference. 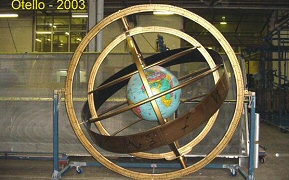 The 2.5 metre diameter armillary sphere in its travel frame. To assemble the statue the sphere was lifted from this frame and fitted into a large steel cradle that slipped into a steel sleeve built into the shoulders of the Atlas statue. 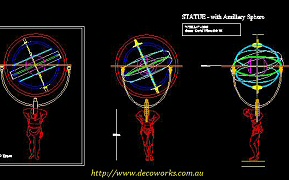 This 2D CAD drawing was made using the reference photo provided. 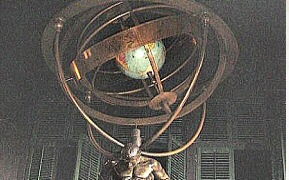 Here is a picture of the assembled statue and armillary sphere on stage at the Opera House. 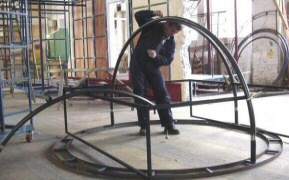 Using a plumb bob to centre the cradle support arms 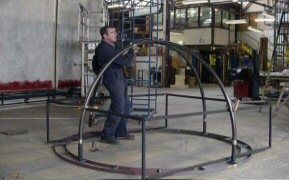 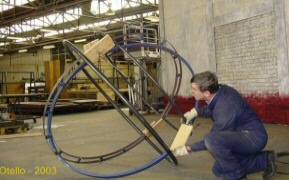 Fitting the tropic rings to the armillary sphere 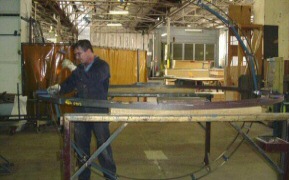 Fitting the meridian ring to the horizon ring