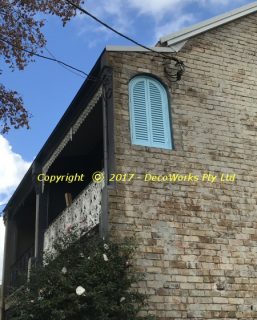 An upstairs verandah in a Sydney terrace had a bare brick opening in its side wall which the owner decided needed some louvre shutters. The owner had some discarded louvre doors available and we were approached to see if they could be recycled and used to make a set of louvre shutters for the wall opening.

The louvre doors were cut to size and fitted with arch sections which matched a timber frame that was built to fit inside the wall opening. Once the window frame had been painted it was fitted into the wall opening and fixed in position with black epoxy filler. Epoxy was used because the wall opening was not square and the arched top not a perfect circle arc resulting in clearance variations between the bricks and the wooden window frame.

As can be seen from the photo below the addition of the decorative window shutters was a major improvement to the overall look of the home. 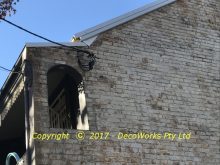 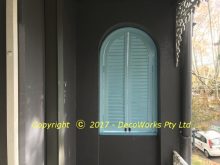 View of the window shutters from the verandah