The various designs of Art Deco security doors, windows and gates produced by DecoWorks have been named after Art Deco theatres from the early 20th Century. It is a nice way to blend our theatrical prop making services with our custom security bars services.

Below are the theatres from which our designs are named. We gratefully acknowledge the Cinema Treasures website for the information set out below. 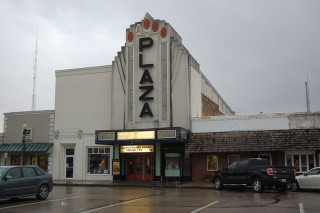 The Plaza Theatre opened on October 25, 1934 with great fan fare. Every major studio at that time sent representatives for opening night. Telegrams were sent from Clark Gable, Joan Crawford, Mae West, Al Jolson and many others.

The Plaza Theatre was designed by architect Larry P. Larsen of Webb City and originally seated 600. It was remodeled in 1945 to the designs of architect Robert O. Boller and had a seating capacity of 587.

Closed in 1986 when a fire at a clothing store next door forced the theatre to shut down. With no funds available and condemnation inevitable, a group of local citizens and business owners stepped forward to head a committee to save this historic theatre. After 10 years+ of negotiating and fund raising, the Plaza Theatre reopened on November 5, 1998. Still a single screen, with original hand painted murals on canvas tapestries hanging on side walls. 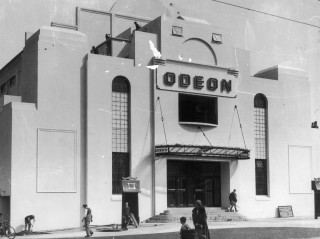 This was the first cinema in the United Kingdom to be called Odeon and was managed/operated by Oscar Deutsch who later founded his Odeon Theatres Ltd. chain in 1933.

He named the chain as such as it stood for Oscar Deutsch Entertains Our Nation.

Located in the Perry Barr district in the north of Birmingham, the Odeon Theatre opened on 4th August 1930. It was designed by architects Stanley A. Griffiths and Horace G. Bradley in a Moorish style both externally and internally. The facade was painted white and had rounded features that gave an impression of domes. Inside the auditorium seating was arranged for 1,160 in the stalls and 478 in the balcony. An unusual feature was that the stalls area widened out towards the proscenium. There were Moorish scenes painted on the side walls in the front stalls area. The Odeon became part of the Odeon circuit from 17th July 1935.

In 1953 the facade of the building was re-built in a plain design of bare brick. It was closed by the Rank Organisation on 3rd May 1969 with Dean Martin in “The Wrecking Crew”.

It re-opened on 14th August 1969 as a Top Rank Bingo Club which continued until closing on 19th February 1983. The building lay empty for a while until it was taken over by an independent bingo operator and was known as the Perry Bingo Club. Later taken over by Granada Bingo and lastly operated by Gala Bingo it finally closed on 5th April 1997. It remained empty for several more years until August 2002 when it was converted into the Royale Banqueting Suite used for banquets and receptions. 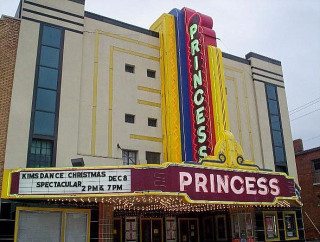 The theatre was renovated in 1940 to the plans of local Decatur architectural firm Albert R. Frahn & Associates, and again in 1949, in an Art Deco style, with seating reduced to 989 with all new seats and more leg room. The Princess Theatre closed as a movie theatre in 1987.

It became a performing arts center in 1988 and then went through a complete renovation in 2001 and officially reopened in February of 2001. 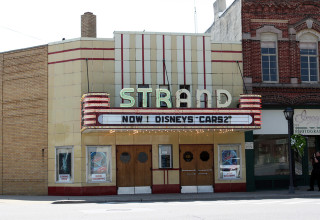 Originally opened in the late-1920’s, the Strand Theatre has been remodeled over the years, most recently in 1994. 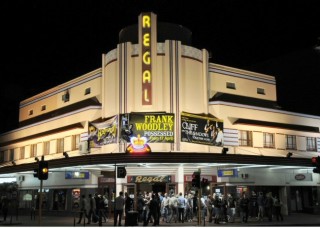 Located in the Subiaco district of Perth. It was built on the site of the Coliseum Picture Gardens which had opened in the 1920’s. The Regal Theatre opened on the 27th April, 1938 with a topical film “Love Under Fire” set during the Spanish Civil War, which was raging at the time. The supporting film was “Shall We Dance” with Fred Astaire and Ginger Rogers.

In 1946 the Regal Theatre was sold to Clarence ‘Paddy’ Baker, whose family have been associations with the site since the Coliseum Picture Gardens days. No history of the building would be complete without a mention of the veteran picture showman who had been associated with the industry since childhood. Paddy ran the Regal Theatre until he died in 1986, leaving his beloved theatre to the people of Western Australia. Since 1987, it has been used as a live theatre.

The Regal Theatre is listed with the National Trust and with the Australian Heritage Commission. 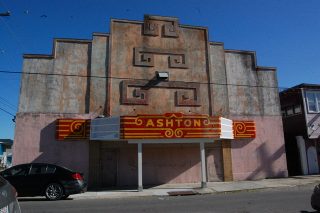 A “nabe” theater in the Hollygrove neighborhood of New Orleans. Owned and operated by the Fonseca family, the Ashton Theater opened in 1927. It was designed by Black American (Creole) architect Ferdinand Rousseve, with Michael R. D’Orsi as associate architect. The Ashton Theater was closed in 1958.

It still stands today, even after taking seven feet of flood water from Hurricane Katrina. The artist Lyn Emery uses the wonderful old theater as a studio. 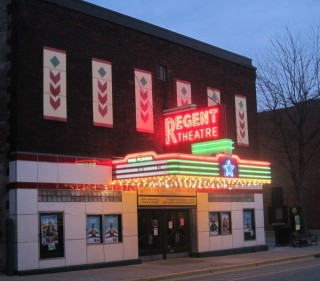 The Regent Theatre opened in 1919 in what was formerly a late-19th century horse livery. It originally not only showed movies, but presented vaudeville acts on its stage.

In the 1930’s, the Regent Theatre received an Art Deco style face lift, including a cream-colored vitrolite facade with red and green highlights. The six second-story windows have been closed up and covered with vitrolite with abstract decoration on them. The late Streamline era marquee, with its only decoration being a large white star, is lit with neon and light bulbs.

After decades entertaining the people of Allegan, the Regent Theatre closed in the early-1980’s. It was threatened with demolition by 1990. The non-profit Old Regent Theatre purchased the theater the same year and restored it to its 1930’s glory in 1996. In 1997, during a violent rainstorm, the roof collapsed causing massive damage just an hour after the last movie of the night let out.

Since then, the Old Regent Theatre has been painstakingly rebuilt and restored once again, including recreating historic panels in the auditorium and the original 1930’s carpeting. The building was rewired electrically, and new curtains were hung. The 20 by 30 foot original screen was salvaged, but needed to be repaired. It is now one of the largest screens remaining in Michigan. 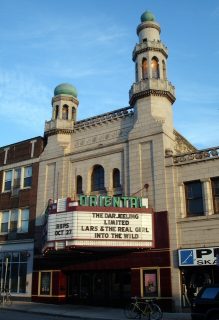 The Oriental Theatre in Milwaukee

When the Oriental Theatre opened in 1927, it was among the most exotic and ornate movie palaces to have opened in Milwaukee with its Middle Eastern-meets-Far Eastern decor. It featured 2 minaret towers, three stained glass chandeliers, 6 larger-than-life Buddhas, several hand drawn murals, 8 porcelain lions, dozens of original draperies, and hundreds of elephants. The theatre was the crown jewel among the 45 theatres in the Saxe Brothers’ chain. The motif is not what first comes to mind today as being ‘oriental.’ Designed by Gustave A. Dick and Alex Bauer, the themes of the decor are East Indian, with no traces of Chinese or Japanese artwork. Milwaukee’s Oriental is said to be the only standard movie palace ever built to incorporate East Indian decor.

Although the large auditorium was divided into three smaller auditoriums in the late-1980’s, the decor was largely kept intact, miraculously, and the theater has managed to retain its 1920’s appearance to the present.

Its Kimball Organ, played each Saturay before each 7 p.m. show, is the largest of its kind remaining in the US. The Oriental Theatre is known for holding the record for a continuous midnight screening of “The Rocky Horror Picture Show”, which it has been performing since January, 1978.