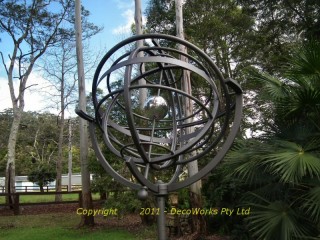 There is no easier way to add some style and class to a landscape than with the addition of a garden armillary sphere. The image of an armillary sphere represented the height of wisdom and knowledge during the Renaissance and it still carries that legacy today.

An armillary sphere is a representation of the celestial sphere that was used to describe the motions of the stars and planets across the sky. The word armillary is derived from the Latin armillae meaning a bracelet. The sphere is made up of several concentric rings (or bracelets) set inside one another which collectively represent an Earth centred view of the celestial sphere.

The Persians and Arabs improved the device even more and developed other astronomical instruments such as the astrolabe. More refinements occurred during the Renaissance particularly by Tycho Brahe (1546-1601).

A description of the garden armillary and more photos can be found on this page.

Another form of garden armillary is a sundial. Usually it is simply two open rings set at right angles to each other with a rod (or gnomon) running down the central axis which casts a moving shadow along the horizontal ring section as the Sun traverses the sky. It is important to align the gnomon with the southern and northern celestial poles so that its axis will be parallel with the north/south axis of the Earth.

Below are some photos taken during construction showing the ring orientation. 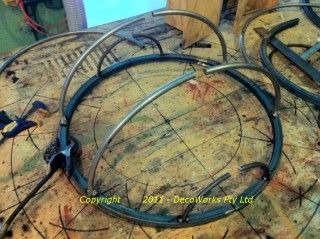 Fitting the tropic rings of the armillary sphere 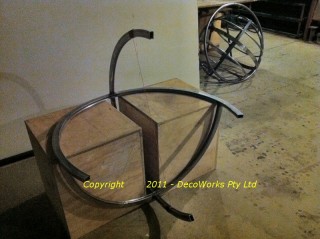 Aligning the meridian and horizon rings