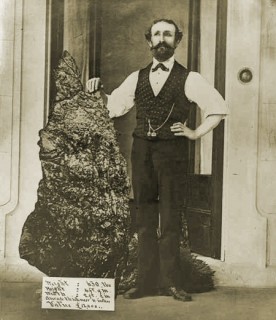 Bernhardt Otto Holtermann, a Taurean, was born in Hamburg, Germany, on April 28, 1835, the year of the Goat.

As a young man he left Germany in 1858 to avoid military service and arrived in Sydney, via Melbourne, on January 20th 1859. After several months working as a waiter at the Hamburg Hotel in King Street he met a Polish miner named Ludwig Hugo Louis Beyers. They both went to Hill End to prospect for gold in the Tambaroora area.

In 1861 they formed a partnership mining a claim at Hawkins Hill called the Star of Hope mine. After five years, and with little success, Holtermann was forced to undertake a variety of occupations in order to hold his claim. Through his business acumen and character he had become the licensee of the All Nations Hotel by 1868 and married Harriett Emmett in Bathurst on February 22th the same year. On the same day Ludwig Beyers married Harriett’s sister, Mary.

Some rich veins of gold were found in the mine in 1871 but were quickly exhausted. The following year one of the mines eight owners sold their share to Mark Hammond. He believed that the existing shaft would produce nothing and that a new one to the West would be more productive. No-one believed him. Without authority from the other owners he sealed off the old shaft and started a new one where, within a couple of weeks and despite the angst of his fellow workers, a rich new vein was discovered. 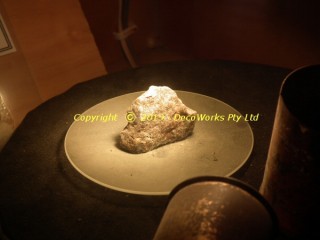 Tip of the Holtermann nugget at History Hill in Hill End

Hammond sold his share in the mine shortly after this discovery at a substantial profit thus missing out on the bonanza uncovered by the last blasting of the night shift at 2am on the 19th October, 1872 – a “veritable wall of gold was revealed”.

The largest single mass of gold ever recorded was brought to the surface where it was photographed with Holtermann who was mine manager at the time. It became known as Holtermann’s Nugget. It was reported to have contained 3,000 ozs of gold. Before the nugget was crushed, along with all the other ore, Holtermann chipped the tip off the nugget as a souvenir. Holtermann would have had no idea that in the future his great grandson, Harry, would sell many of his personal effects to History Hill at Hill End. Among these artifacts was the tip off the world’s largest nugget that Holtermann had souvenired over a century earlier.

An entry in the mine day book a few months later recorded that an even larger nugget was found containing an estimated 5000 ozs of gold. It was reportedly broken up underground by the miners to avoid the huge effort of having to bring another mammoth piece of rock to the surface in one piece only to see it broken up at the battery. However the *Topics of the Day* on page 2 of the South Australian Advertiser of Monday, 17th February 1873 quotes an article from the Hill End Observer and Tambaroora Herald of the 5th of February which describes the discovery of this second mammoth nugget and how it was raised to the surface. It remained on display for a week or so before being sent to the battery. No photographs were taken as Beaufoy Merlin and his equipment were elsewhere. 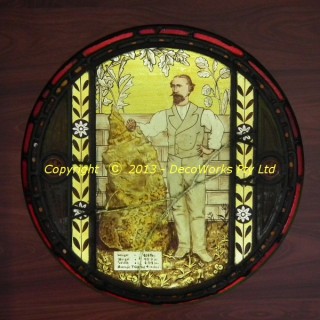 Holtermann left Hill End a very rich man to pursue his many passions including photography and politics. He built a Victorian Free Classical mansion in Lavender Bay with a large square tower overlooking Sydney Harbour. He commissioned a round stained glass window 45cm in diameter for the tower which portrayed himself standing with the nugget that had changed his life.

It was from the top of this tower that a magnificent panoramic photograph of Sydney was captured, on three huge glass negatives weighing 27kg each, by Charles Baylis. In 1876 Holtermann took this masterpiece to the US Centennial Exhibition in Philadelphia to promote Australia as a destination for immigration. A copy of this panorama can be seen today in the corridor of North Sydney Council’s Customer Service Centre at 200 Miller Street along with a comparable panorama taken from the SHORE tower in the 1970s. After Holtermann’s death his mansion was bought by Sir Thomas Dibbs who, in 1888, sold it to The Church of England. It is now part of SHORE at North Sydney. The tower was bricked over in 1934 but the stained glass window is still extant and is housed in the foyer of the school library. 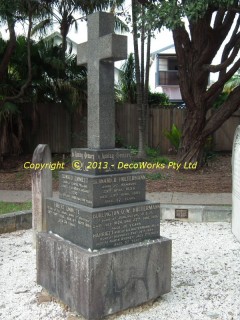 Holtermann died on April 28, 1885 (his birthday) after a long illness and was buried in St Thomas’ Cemetery, Crows Nest. Also buried with him is his wife, Harriet, and some of their children and relatives. A brief reading of the inscriptions indicate that Holtermann’s life was not without its personal tragedies. He was a truly remarkable man who was ahead of his time in both thought and action.

Any discussion about Holtermann would not be complete without an acknowledgment of the efforts of Keast Burke who discovered the treasure of 19th century photographs produced by Holtermann, Merlin and Bayliss. From this important collection, found locked in a garden shed in Chatswood in 1951, Keast and his wife, Iris, uncovered most of what is known of Holtermann, Merlin and Baylis today.

In 1973 he published his book, “Gold and Silver ; An Album of Hill End and Gulgong Photographs from the Holtermann Collection” which remains the best reference on this subject. An excellent site, dedicated to Keast Bourke, which contains historic details of Holtermann, his associates and the role that photography played in the 1870’s in Australia can be found on Keast Burke’s website.