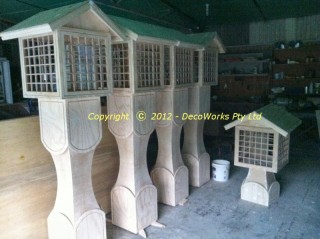 Japanese lanterns prior to painting

The X5 large Japanese lantern props we are building are now ready to go on to the painting and finishing stage. There was a lot of detail work involved in making the props which was not evident until construction began.

A lot of simple routed detail was required on the Japanese lantern side panels, around the light box windows and roof which proved to be a very time consuming process in order to achieve the desired result.

Initially, the lattice effect on the Japanese lantern windows was going to be stick on black vinyl however, because of the size of the windows, it was apparent that they would have looked very flat and cheap under stage lights. Real timber lattice was used instead which, although very fiddly and time consuming to construct, makes for a visual effect that is far superior to vinyl cutouts and will produce more interesting shadows under stage lights.

Stay tuned to see how they end up looking with their final gloss black enamel finish and frosted perspex windows!