An interesting and unusual job was commenced recently which involved the design of a laminated curved plywood crown display table which will be used as a display table for a birthday cake at a party. The final design will be a gold regal crown approximately 800mm high and 700m wide with a removable platter on top to accommodate the cake. 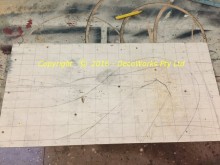 Drawing the curved shape on a grid

The crown was first designed using CAD to get the proportions balanced and to determine the sizes of the individual parts and how they were going to fit together. A scaled down version of the crown side profile drawn within a scaled grid was printed out on an A4 sheet of paper.

Next two sheets of 15mm plywood the size of the final profile were screwed together and a 1:1 grid was drawn onto the top sheet. The 1:1 profile shape was then drawn on the plywood using the scaled A4 printout as a guide. Once the profile shape had been drawn the rest of the form shape was added and the shape of the first form section was cut out using the bandsaw. 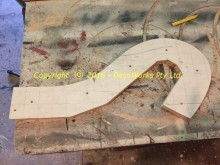 First from profile cut to shape

The plywood offcut left over after cutting this first form profile will be used later in the build to make the second half of the profile form.

A belt sander was used to smooth the profile curves of the 15mm plywood *sandwich* so that both pieces are identical. These two pieces of plywood will form the top and bottom faces of the profile form so it is important that they are the same so that a smooth curved surface can be achieved that will clamp the plywood laminates together with an even pressure across its surface. 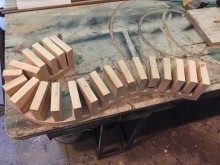 The finished width of the laminated curved plywood sections will be 120mm so the width of the form profile was made to be 130mm so the sections can be trimmed to size after each one is made.

The two 15mm plywood sections are now separated and 100mm high blocks of wood are arranged along the profile curve as shown on the left. 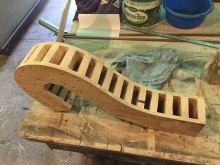 Once these have been glued and screwed the form profile is again smoothed on the belt sander so the blocks follow the contour of the top and bottom sections. This ensures that the 4mm plywood skin which is next attached to this face of the profile is supported as much as possible so it wont deform when under pressure from the clamping process later. 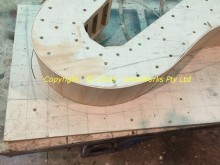 Marking out the second form profile

The curved plywood laminates will be approximately 20mm thick so the profile of the second half of the form must be 20mm offset from the profile of the first form. This ensures that when the two halves are clamped together there with be an even pressure along the entire length of the curved section making a uniform bonding of all the laminates.
You can see in the picture how the completed first profile is placed on the offcut from which it was cut and a 20mm offset has been drawn along its profile. 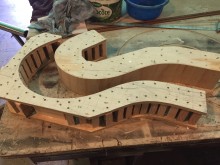 The second profile is now cut out on the band saw and the same process used in making the first form is repeated. The two plywood halves are separated and 100mm spacer blocks are attached along the profile between the two halves. The inside profile is again sanded so that the spacer blocks follow the profile of the sides so that the 4mm plywood face will be well supported when the two halves are clamped together with the laminates inside. 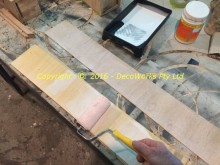 Now that both form profiles have been made we can make the curved plywood crown sections. There will be six 3.5mm plywood laminates needed for each of the six crown side sections. Strips of plywood 140mm wide are cut across the width of the plywood sheets. This is ordinary plywood and it bends much more easily across the sheet than along its length. Once all the strips have been cut the glue is applied.

I have found that using a paint roller gives the best coverage over the plywood surface. Prior to applying the glue I like to wipe a wet cloth over both plywood faces to ensure that there will be no dry spots and that the glue gets good penetration into the wood. Both sides of each plywood strip are covered in glue (except the top and bottom of course) and stacked on top of each other. 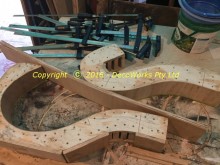 Fitting the plywood laminates into the form

Next carefully lift the plywood laminate *sandwich* and lay it between the two halves of the profile form. You need to judge where to start forcing it into the profile so that it doesn’t come up short at either end. This profile has a particularly tight radius and the bending had to be done gradually and carefully to avoid snapping the laminate sections. I found it best to use the first profile form to push the *sandwich* into the form. Make sure that the bottom form has a stop on the bench so it doesn’t move about as you manipulate the plywood into position. 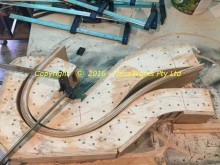 Pulling the plywood into the profile form

Once the *sandwich* was bent into the tight radius a clamp was used to gradually pull it further into the profile form. A bit of juggling was needed with several clamps to get a uniform thickness along the profile curve. A clamp on the right hand side levered the first form into the second to achieve a snug fit. Make sure that the individual laminate strips don’t slip too much out of position. A wooden mallet can be used to tap them down flat before final clamping if they have moved out of alignment. 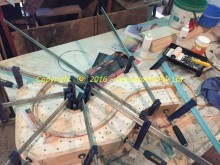 Once you have both profile forms in position and are happy with the position of the plywood laminates several other clamps can be applied and tensioned so that there is an even secretion of glue along the entire length of the section. This is the best way to gauge whether you will get a secure bond. Wipe all excess glue from the laminates (top and bottom) before leaving to dry. Leave it a good 24 hours before removing the clamps. 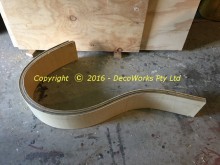 After the glue has been allowed to dry the clamps are removed and the laminated section can be removed. The section holds its shape very well with only a few millimetres spring back measured. The next step is to trim the *sandwich* width and trim both ends in preparation for assembly.

The first thing to do is make one straight edge. Here is where the profile form comes in handy again as a means of holding the section securely while the edges are trimmed. The most convenient and direct way to clean up one edge is with a hand plane. 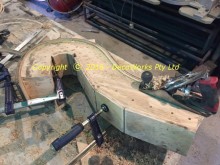 Planing one side flat on a section

The section is securely clamped back onto the profile form with about 5-8mm protruding above the form face. The laminated section is now planed back to the edge of the form so that all the laminated strips are at the same level. Once this has been done the section is removed from the profile form and the edge is sanded smooth on the belt sander. We now have a straight edge from which the correct width cut line can be marked. 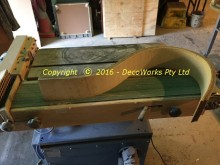 Sanding the edge flat on the belt sander 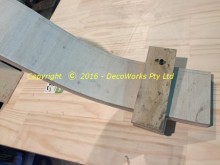 Marking the cutting llne for the section width

To save on a lot of hand planing a band saw was used to cut the majority of the excess width from the section. This needs to be done very carefully because of the irregular shape of the section. 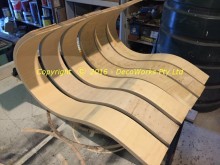 Once the section has been cut to width it is again put on the belt sander to smooth up the edge. The final job is to trim both ends of the sections so they can be assembled as per the drawing. The procedure described above has to be repeated six times in order to make all the parts for the crown table.

A circular base was made with six equal rebates cut around the circumference to accommodate the laminated curved plywood sections. 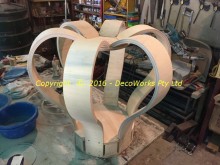 The crown table was now be assembled by glueing and screwing the sections to the circular base section and the upper support disc. A strip of 1.5mm plywood is fitted around the base to hid the bottom of the side sections and give a cleaner look.

The next task is to undercoat and fill the framework in preparation for the gold finish. There will also be mouldings and trimming added to the frame to add to the visual appeal of the display table. This process will be described in another post.