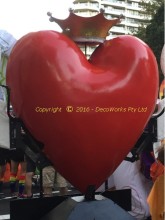 The making of a giant 3D heart for the recent Wayside Chapel winged heart project was a great exercise in how to sculpt large objects for armatures to make large fibreglass moulds. The heart had to be made as quickly and cheaply as possible so some shortcuts were made that had both positive and negative consequences.

Instead of making a two piece mould it was decided to make a perfectly symmetrical half mould so both front and rear sections could be cast from the same mould. This was achieved by first drawing half a heart on a piece of plywood. A second piece of plywood was fastened under the first and then both pieces were cut as one on a bandsaw. After sanding the the edges smooth the plywood *sandwich* was split and fastened together, side by side, making a perfectly symmetrical heart shape. 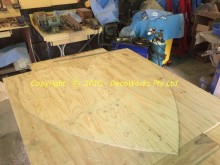 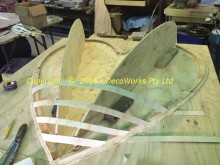 Building up the heart profile using templates and ply strips 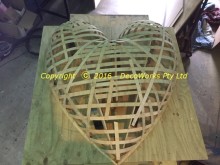 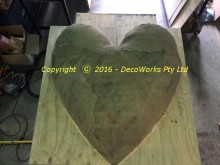 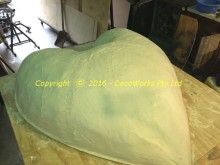 Casting plaster was applied over the hessian covering to make it rigid. 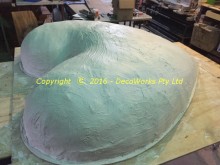 To smooth the heart shape a thick layer of Gyprock top coat filler was applied using a spatula taking care to make the layer as smooth as possible. 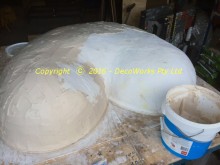 Applying the Gyprock top coat filler over the plaster form. It was carefully filled out to match the heart outline defined by the base ply template. 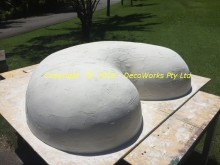 Form ready for smoothing after the Gyprock dried

In the rush to get the mould made I decided to save time by not making the heart form super smooth before applying gelcoat and matting. Instead I would apply a double thickness of gelcoat when making the mould and then sand any irregularities from the mould directly. A quick coating of wax mould release was applied before applying the gelcoat and fibreglass matting over the heart form. This was a big mistake. The wax soaked into the not quite dry Gyprock allowing the gelcoat to stick firmly to the heart form making its easy removal impossible. 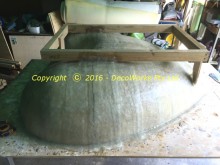 With the fibreglassing completed the mould was ready to be removed from the form but it would not budge. 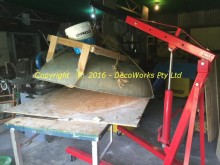 The mould was firmly stuck to the heart form. Weighing in at over 100kg the mould had to be lifted from the work table so the form could be cut out from underneath the mould 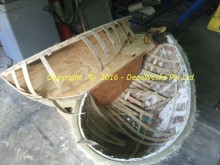 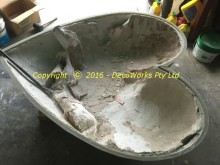 Removing the plaster and hessian reinforcement

Once the ply form work and hessian had been removed there was still a thick layer of plaster and Gyprock stuck firmly to the fibreglass. The only way to remove it was to use a hammer and chisel. The chisel had its corners rounded and the cutting edge dulled to minimise the inevitable damage that would be done to the mould interior surface. 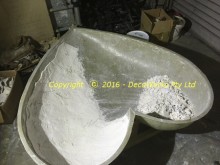 After 4 hours work only half the mould had been cleaned. 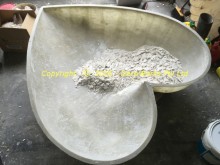 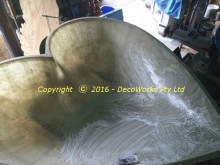 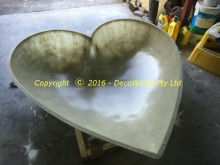 First layer of gelcoat with red pigment applied to the mould. This was followed by two layers of matting. 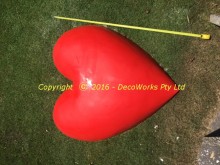 The first fibreglass heart shell removed from the mould. It popped out very easily because the mould release was applied correctly this time.

The shell of fibreglass was very flexible and had to have bracing fitted inside to make it rigid. This was done by hot glueing pieces of cotton rope on the inside and applying fibreglass matting over the top. The front shell also had a steel framework fitted so it could be attached to the wing mechanism. 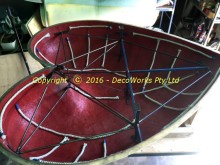 The internal bracing in the front heart shell showing the cotton rope before being fibreglassed. 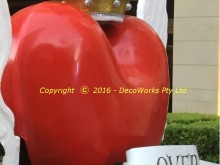