Fibreglass moulds can be a one piece mould or, if the object has a complicated shape, made in two or more separate pieces bolted together to make the final mould. This makes removal of casts from the fibreglass moulds possible. There have been many unhappy souls who have made a cast in fibreglass moulds only to find they cannot remove them. There is no flexibility in fibreglass moulds so things will get permanently stuck if there are any undercuts.

The aim is to make the surface of fibreglass moulds as smooth as possible. If the surface quality of the mould is like a mirror then the cast object will be the same. The extra care taken in making the mould will reap rewards when casting later.

Mould release agents or wax should always be applied to moulds before laying fibreglass matting. The following steps are a general guide to making multi-section fibreglass moulds.

You must carefully plan where you want fibreglass moulds to split. In the photo you can see where lines have been drawn on a statue defining mould sections where there will be no undercuts. It is sometimes easier to lay the object your working on in a horizontal position. This is sometimes not practical. Start by building a flange along the lines that define a mould section. Plasticene has been used because it’s easier to work and get a clean right angle join between the statue surface and the flange surface. You can see in the photo that the first mould section made was the buttock area. When making fibreglass moulds it is a good idea to place a few small 12mm diameter domes along the flange. These will form alignment keys when you make the adjoining mould section. This ensures mould sections line up exactly when finally bolted together.

If the surface is porous seal it with several coats of shellac. Give it a light sanding with steel wool between coats. Apply a wax release agent and polish it well to get a glossy finish. You may need to repeat this several times to get a smooth surface. Pay particular attention to getting the release agent on the flange.

Wearing safety goggles mix up a quantity of gelcoat in a 2 litre plastic ice cream container and apply an even layer over the section and its flange. Make sure you fill the right angled join between the flange and the object. Fibreglass matting doesn’t fill sharp corners or fine detail very well so make sure these are all generously coated. Once the gelcoat has gone off your ready to lay down the first layer of fibreglass matting.

Get a thin piece of plywood about 1000mm by 600mm and put it next to where your working. Tear up some fibreglass matting into 120-150mm squares and lay them out on the plywood. Using a 2 litre plastic ice cream container AND wearing safety goggles mix up about 600ml of unwaxed resin with MEKP catalyst. It is usually about 50:1 but I like to use a little extra catalyst to speed up the reaction. Don’t put too much in because the chemical reaction will be quite brutal and get so hot it will start fuming and could burst into flames. You should be aware of this catalytic reaction with resins. It is worth doing a bit of experimenting with different ratios so you get a ‘feel’ for the dynamic of the material you are using and learn to respect it.

With a 50mm brush paint the resin generously onto all the squares of fibreglass matting on the plywood. As the glass matting absorbs the resin it will go from a white colour to the colour of the resin. Now apply a light coat of resin over the gelcoat and then pick up the first square of wetted fibreglass matting and lay it down on the gelcoat. Lightly dab it down with the brush to remove air bubbles. Do this with the rest of the matting in quick succession. It’s already soaked through with resin so you can work very quickly.

Once all the matting has been applied you should still have time to dab more resin with the brush and smooth it all down. Try to get all the matting totally smooth with no needles of fibreglass sticking up. Take care doing this now and you will find it easier to lay the next layers. Fibreglass splinters on fibreglass moulds can be very painful so try to avoid them in the first place.

Timing is everything when working with resin. Take note of the consistency of the resin as you are working. When it is about to go off you will notice it getting a little thicker. Finish whatever you are up to ASAP because once the resin starts to gel it is of no use. 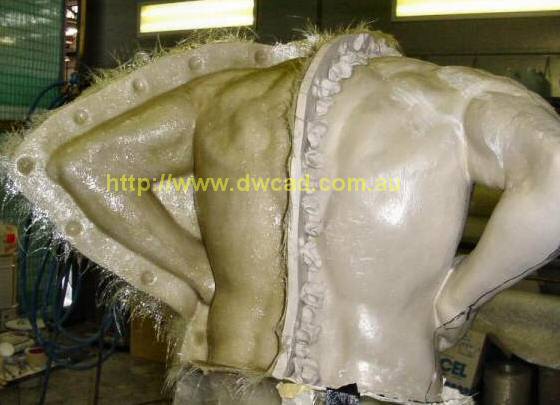 Now remove the plasticene flange from around the section you just finished. Extend the flange of the just completed section along the lines of the next section you want to make by using plasticene as before.

You can see in the photo that the back section has the plasticene flange running down the statue spine. The alignment domes are clearly visible around the arm and the flange of the buttock section forms the support for the lower flange of the back section. The secret to making good fibreglass moulds is to make accurate, well fitting flanges on the mould sections.

Repeat Steps 2 – 5 taking care to wax the flange on the finished sections. When you’ve finished fibreglassing all the mould sections drill 10mm holes through the flanges of each mould section. These are for bolts with wing nuts to hold the sections together when your making a cast.

When the fibreglass has cured separate the fibreglass sections from the object. They should pry off with a screw driver between the flanges. You can also use compressed air to blow between the fibreglass and the object to help separation. Once separated give the outside surface of the mould and the edges of the flange a light sanding to remove any sharp protrusions. You can, if you like, mix up a little more resin and paint the sanded sections with resin. When it cures it gives the mould a smooth glossy finish. This makes fibreglass moulds much easier to handle.
Give the mould sections a good wash to remove release agent (or clay in our example) from the mould. If there are any imperfections they can be sanded smooth with fine wet’n’dry abrasive paper.

The head of the fibreglass body mould was a separate silicone mould because of its detail. Fibreglass moulds may need bracing if some of the sections are quite large and not supported by other mould sections.