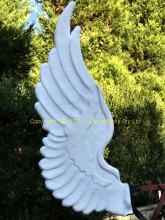 The recent Wayside Chapel winged heart project had two large wings that flapped up and down under the control of a pneumatic cylinder. For safety reasons it was decided to make foam wings so they would be flexible enough to prevent someone getting their head taken off if they happened to contact a wing when it was operating.

However part of the wing had to be structural for the correct flapping motion to be achieved. This was solved by making the bottom section of the wing with a plywood core and the rest from a sandwich of 5mm closed cell foam. The steps of the construction are shown below.

Clicking on an image brings up a larger image. 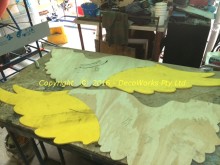 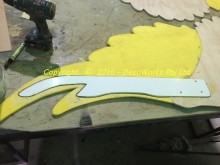 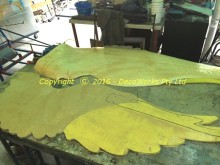 A 5mm sheet of foam was glued to both sides of the plywood and foam core for strength. 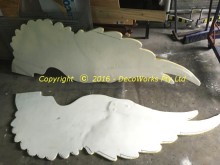 Both wings have the front and back of their ply and foam cores covered in 5mm foam.

Another sheet of 5mm foam was cut out to the wing shape and the lines of the feathers were cut. Narrow strips of foam were then glued along these cuts so that when it was turned over there would be a raised feather line in the foam. 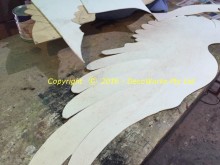 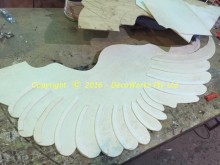 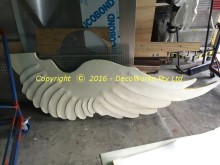 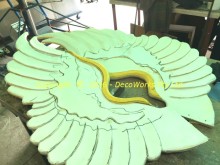 Next ivory coloured cotton fleece fabric was glued over the foam wings. This gave the wings a softer look and highlighted the raised feathers and other detail. 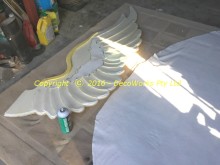 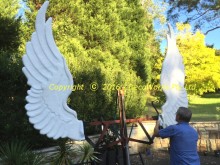