For a description of latex mould making we will make a two part mould of a deer head. The following steps are the general ones to follow regardless of what you are moulding. 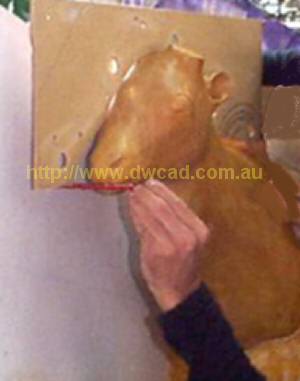 Build a flange around the middle of the head where the mould will split. Fill all gaps with plasticene so that there is a clean right angle join between the object surface and the flange. This minimises any join marks when the two halves are bolted together.

It’s a good idea to place a few small 12mm diameter domes along the flange. These will form alignment keys when you make the second half of the mould. This ensures both halves line up exactly when bolted together. 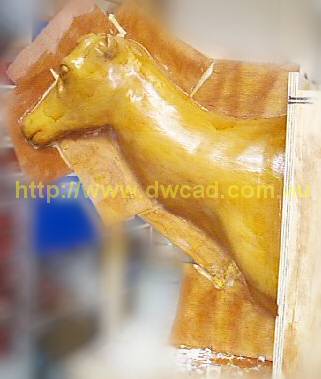 Paint several successive coats of liquid latex over the urn and flange. It is important that these initial coats are not too thick and that they dry properly between coats. If you rush the process the latex will lift off the head in places.

Once you have a nice thick layer of latex over the head it needs to be reinforced. Kitchen wipes are ideal for this. Cut up some Chux superwipes into suitable strips and apply them to the latex skin with more liquid latex. Again do one layer at a time and allow to dry completely before applying the next layer.

Repeat this process 3 or 4 times until you have a tough reinforced skin over the deer head. 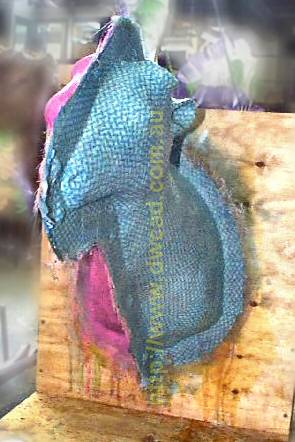 When it has dried give it a couple of coats of PVA mould release and leave to dry. Next lay a fibreglass jacket over the top of the latex. Get a thin piece of plywood about 1000mm by 600mm and put it next to the mould. Tear up some fibreglass matting into 120-150mm squares and lay them out on the plywood. Using a 2 litre plastic ice cream container AND wearing safety goggles mix up about 600ml of unwaxed resin with MEKP catalyst. It is usually about 50:1 but I like to use a little extra catalyst to speed up the reaction. Don’t put too much in because the chemical reaction will be quite brutal and get so hot it will start fuming and could burst into flames. You should be aware of this catalytic reaction with resins. It is worth doing a bit of experimenting with different ratios so you get a ‘feel’ for the dynamic of the material your using and learn to respect it.

With a 50mm brush paint the resin generously onto all the squares of fibreglass matting on the plywood. As the glass matting absorbs the resin it will go from a white colour to the colour of the resin. Now apply a light coat of resin over the latex mould. Pick up the first square of wetted fibreglass matting and lay it down on the latex. Lightly dab it down with the brush to remove air bubbles. Do this with the rest of the matting in quick succession. It’s already soaked through with resin so you can work very quickly.

Once all the matting has been applied you should still have time to dab more resin with the brush and smooth the surface. Try to get all the matting totally smooth with no needles of fibreglass sticking up. Take care doing this now and you will find it easier to lay the next layers. Fibreglass splinters can be very painful so try to avoid them in the first place.

Timing is everything when working with resin. Take note of the consistency of the resin as you are working. When it is about to go off you will notice it getting a little thicker. Finish whatever your up to ASAP because once the resin starts to gel is of no use. Repeat this step until you have 2 or 3 layers of fibreglass over the latex mould. Leave it to cure for a couple of hours. 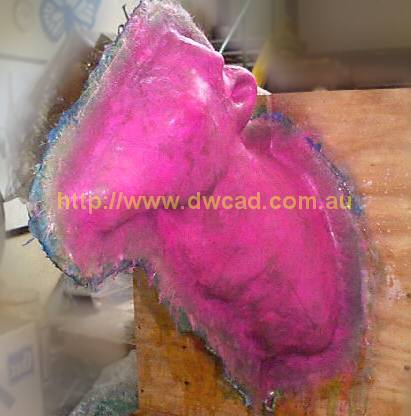 Remove the timber flange and prepare the other side of the head in the same way repeating Step 2 & 3. Make sure you put mould release on the flange of the half you just finished so you don’t stick the two latex halves together.

When finished drill two 9mm holes through the flanges on both sides of the head. These are for bolts with wing nuts to hold the halves together while the fibreglass cast is curing.