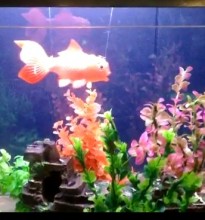 A recent stage production required a prop aquarium in one of its scenes. An empty Perspex box with some water plants and a fish hanging from the prop aquarium light had been provided but it was a very static arrangement. The designer requested some way of giving the fish some movement within the aquarium.

The mechanism we designed is basically a miniature cable car. Two large pulleys have a continuous steel cable around them which is tensioned so that the rubber fish can be suspended from the cable. A 12V electric motor drives one of the pulleys via a belt drive which causes the cable with the suspended fish to move around the interior of the prop aquarium. The second pulley is spring loaded to maintain a constant tension on the cable.

The video below shows the operation of the mechanism and illustrates its layout.