Set designs can involve having prop bookshelf or a library on stage. Real books can be used but their weight can be an issue. If weight needs to be reduced usually the pages are removed leaving only the spines which solves the problem. While this works for a small number of books in a prop bookshelf it becomes difficult with hundreds or thousands of them. You can buy faux books which are cast sections of book spines about 30 cm wide which are very realistic. They are also quite expensive, uniform in height. They also look two dimensional because they have no depth.

The technique described here produces a realistic looking prop bookshelf with depth. It involves making a fibreglass mould of a selection of books from which the fibreglass casts can be adapted to different configurations. It’s not a cheap option but the flexibility, weight saving and realism is worth the effort.

Buy a variety of old books that fill one bookshelf section of your bookcase. Choose books that have embossed lettering on the spines or at least some sort of detail. Using a hot glue gun fasten them side by side, with the spines roughly aligned, on a board. 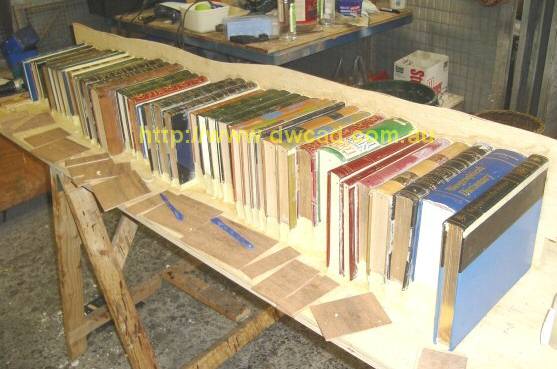 The books all have different depths so draw a line corresponding to the depth of the largest book along the back of the books. Fit a vertical piece of wood along this line about 10cm higher than the tallest book. This will be the back of the mould. Fill the gaps between the other books and the back of the mould. You can use bits of ply or polystyrene. It doesn’t have to be too neat as it will be trimmed off the finished castings. 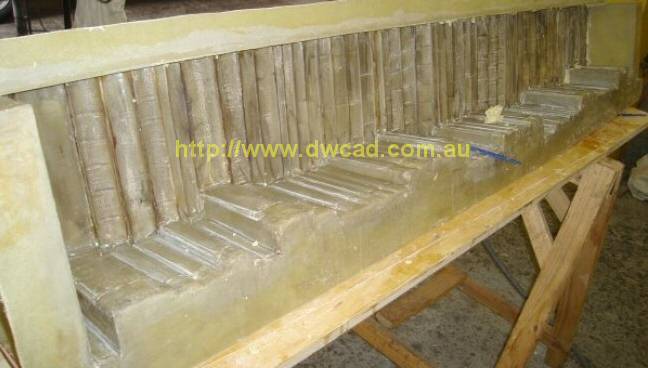 After making sure all the gaps are filled and smoothed with plasticene give the whole thing a couple of coats of PVA mould release. Put a layer of gelcoat on first to capture all the detail on the book spines and finish the mould off with 3 or 4 layers of fibreglass. This is described in more detail in the post on making fibreglass moulds.

After the mould has cured remove the books and you will end up with a prop bookshelf mould as shown in the photo. 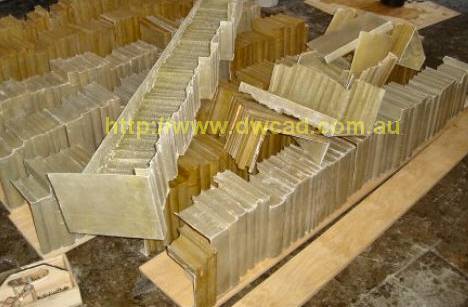 Clean the mould thoroughly and prepare it for making casts. You can make as many as you need. Since they will all be the same you can add a bit of variety by cutting casts in half or quarters and fibreglassing them to other section. This mix and mash technique gives several bookcases a more random arrangement of books. If they were all the same the repetitive shapes of the books would look very obvious to the audience. 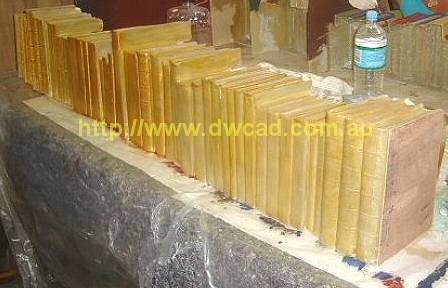 Painting the casts is the next step. To get the gold lettering on the spines mix up some gold powder in some shellac and paint all the spines paying particular attention to the lettering.

You can now see why it’s best if the original books had embossed lettering. 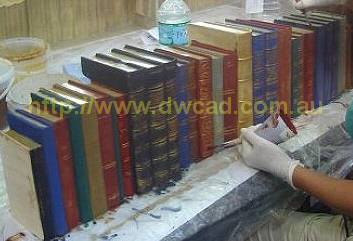 Now lightly brush different colours on the books taking care not to get paint inside the embossed lettering. Wiping a flat brush over the spine is best because the bristles don’t get into the lettering. Don’t worry about getting it too perfect. A bit of gold here and there actually makes the books look a little worn. Make sure you paint the books in matching positions in separate bookcases a different colour. This helps randomise the look when they are viewed together. 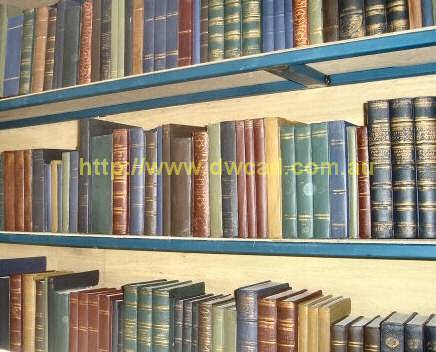 Now mount the prop bookshelf sections into your bookcase. They can be screwed down from behind but every situation is different so choose the method that is best for you.