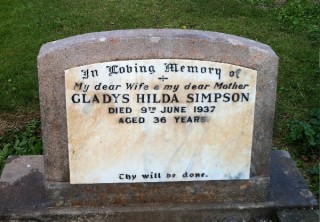 One of the more unusual projects tackled recently was to repair headstone lettering on an old grave. The completed project is shown in the photo on the right. The inscription had been engraved into the headstone marble in a Gothic font and the letters, made from lead, were fastened into place by two small pins drilled into the bottom of each letter cavity and held in place with glue. Over the years the glue had deteriorated and oxidation had taken its toll on the lead resulting in many of the letters falling out or being lost resulting in the need for headstone repair.

Replacement lead lettering was no longer available. To repair headstone lettering that had been lost required a new technique to be developed as an alternative. Painting in the letters with black paint was quickly discarded as it looked terrible because of the difficulty in getting the fine serifs on the lettering.

Black polyester adhesive filler was finally chosen and used to fill the voids left by the missing lead letters. Once cured the filler was carefully sanded back with very fine wet’n’dry to reveal the engraved letters underneath. The picture below illustrates the process and shows how the headstone looked before the repair.