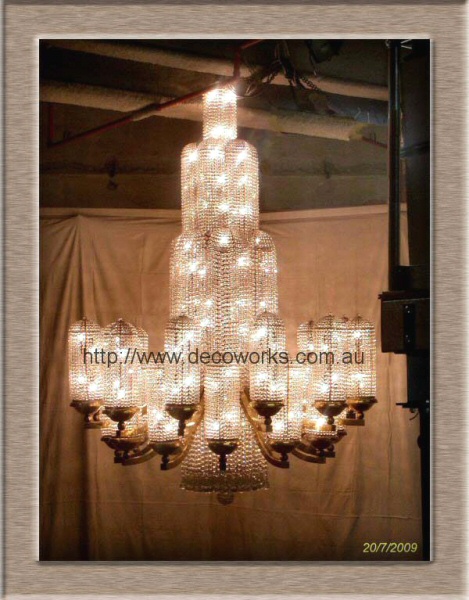 The Art Deco chandelier from the Baccarat/Christofle Pavillion at the Paris 1925 Exposition Internationale des Arts Decoratifs et Industriels Modernes is of great historical significance and has a fascinating history.

The chandelier was sold after the Paris exhibition and installed in the foyer of the new Regent Theatre in George street Sydney which opened the following year in 1926. The most likely buyer was Frank W Thring snr who was at the time head of the theatrical firm J. C. Williamson's. He was a keen traveller and during his travels bought many pieces of objet d'art back to Australia to decorate his cinema chain.

After the demolition of the Regent in 1990 the chandelier was dismantled and placed in storage. While in storage access was allowed so measurements could be taken to build a replica chandelier for the Metro Theatre in George Street Sydney. Details of this chandelier and its construction can be found here.

Recently the owner of the chandelier, Leon Fink, had it reassembled and restored for a potential sale. The picture on the right was taken on 20th July 2009 in the basement of the Sydney building which had been its home for over twenty years. In December 2010 the chandelier was sold to an overseas buyer (possibly in Paris or London) and it departed Australian shores for good. Hopefully its whereabouts will not remain a secret so that its fascinating story can continue to unfold.