This is the commemorative patch of the Space Shuttle program which concluded with the flight of STS-135 (Atlantis) on July 8th 2011.

The fan shape which has been used is a popular motif of the Art Deco period. It is the basis of our Plaza, Regent and Regal security bar designs and has an uplifting and *into the future* feel about it. It fits perfectly with the ideals of the Shuttle program.

The final Shuttle flight patch, STS-135 (below) uses a similar motif but this time in reverse and is a representation of the engine thrust on takeoff. This also conveys an upward and uplifting feeling even though the pattern is reversed compared to the fan in the Shuttle program patch. The prominent *omega* symbol is a nice choice being the last letter in the Greek alphabet.

Each mission had its own patch design but these two are my favourites. 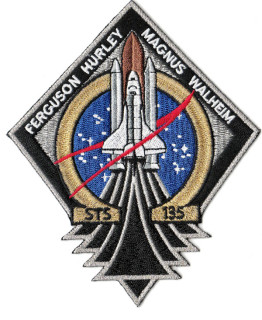