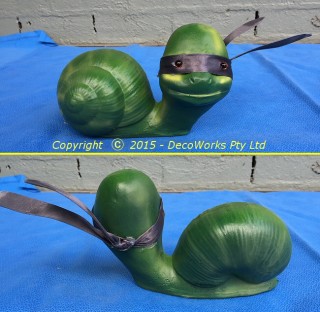 Detail of a completed Ninja Snail

This picture shows one of the completed Ninja Snail props made for The 52 Storey Tree House stage show. Twelve snails on a wooden tray were required for the show.

Because twelve were required their overall weight was of prime consideration. The construction technique chosen involved making a hero snail sculpture and then making a fibreglass mould. The mould was then used to cast the required snails in expandable urethane foam. The urethane foam had the advantage of a quick turnaround between castings plus being very light. 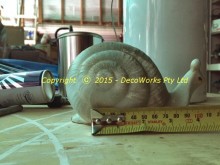 Small snail statue used as a base for sculpture 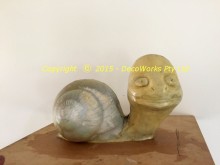 A small ceramic garden snail sculpture was found that had the correct sized shell. A new head was sculpted using plasticene over the existing snail head. 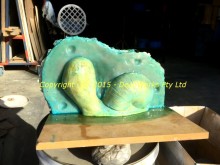 First half of fibreglass mould completed 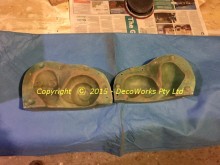 After letting cure for a day the fibreglass mould halves were removed from the snail sculpture. This step is usually glossed over in descriptions of mould making when, in reality, it can be the most difficult aspect of the whole process. It is very easy to damage the mould if it gets stuck in unexpected undercuts etc. Once released and cleaned up the mould is ready to prepare for casting. 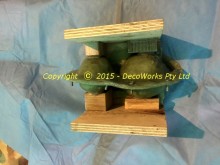 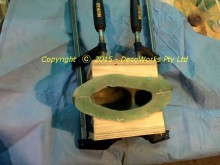 The mould is first waxed and bolted together. A wooden frame is built around the mould so that it can stand flat on the bench. This makes it easy to pour in the urethane foam. A flat cover is made to clamp over the top of the mould after the foam is poured in. A few small holes are drilled in the cover to relieve the pressure buildup of the expanding foam.

It is a good idea to clamp the mould halves together as well to prevent them distorting outwards under the pressure of the expanding foam. 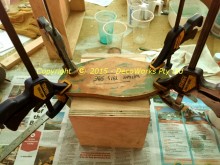 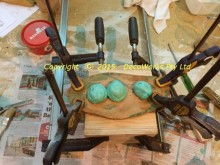 Expanding foam seeping out of relief holes in mould

Urethane foam comes in a Part A and Part B which is mixed together by weight. You can also add a tint to change the colour od the foam. I chose a green base since the final colour was going to be green. Some experimentation is needed to work out the volume of mixed foam required that will expand to fill the mould (with some to spare). Once this is determined the two parts are poured into a container and thoroughly mixed with an electric drill attachment for a minute. It is then quickly poured into the mould and the top cover clamped in position. Within minutes the foam will expand filling the mould and releasing the excess out the vent holes in the cover as shown. 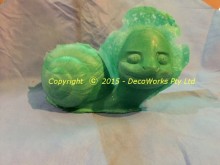 Casting removed from mould before cleaning 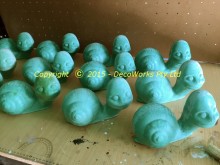 All the cast Ninja snails trimmed and ready for painting

After about an hour the clamps can be removed and, if mould release has been correctly applied, the casting should pop out from the mould. Again, this is sometimes not as easy to do as is often portrayed in “how to” videos. You will get quicker as you learn the dynamic of the materials. It is doing this part of the process that highlights how strongly you made the flanges of the mould. It often requires quite a bit of force to pop the mould halves from the casting and the mould can be damaged if it is not strong enough.

Foam inevitably seeps between the mould halves but this is easily trimmed off. The final step is painting the snails and air brushing on highlights. Small plastic eyes from Spotlight are glued in position under the ribbon masks. The ribbons themselves are folded in half and glued with some florist wire which allows them to be shaped as required.