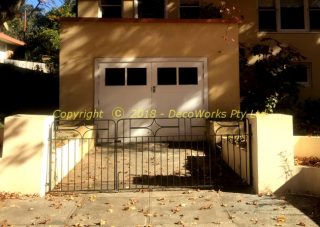 The owner of this Art Deco home wanted to keep the original front gates so decided on a front gate restoration to bring them back to their original condition. This was easier said than done. Over the years a large Japanese maple tree had pushed one of the driveway gate supports out of square making the front gate impossible to close. In fact the front gates had been left open in a deteriorated state for decades.

We were approached to see if anything could be done to rectify the situation. A small pedestrian gate further along the wall had also fallen victim to the same fate with tree roots moving the brick fence over the years so the gate would not even fit between their supports anymore. The client did not want to demolish and rebuild the fence but wanted to retain the original front gates as much as possible.

The first thing was to remove the gates and return them to the workshop. Firstly they were sent to be sand blasted to remove the old paint and corrosion. Careful measurements were made of the front gate supports to determine how they could be re-hinged. The existing hinges and latches were severely corroded and could not be used so a new hinge and latch arrangement had to be devised.

With the new hinge arrangement the driveway gates had to be cut down approximately 100mm to fit between the support pillars. By cutting 50mm off the hinged side of each gate their symmetry was retained without detracting from their appearance. 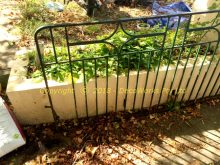 The original driveway gates were corroded and missing parts 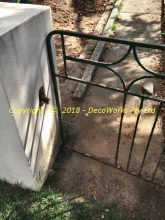 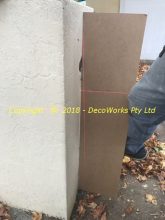 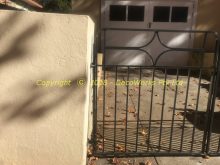 Once the lean of the gate pillars had been determined a compensating hinge arrangement was built so the gates would all hang square once again. 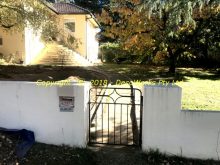 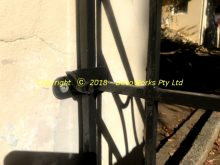 The pedestrian gate also had to be cut down about 50-60mm as well and missing parts replaced. A new hinge and latch arrangement was devised for it as well. It proved impossible to find a suitable gate latch. The original latches and hinges were no longer available and most gates nowadays fit to the edge of a pillar, not the middle. A new latch setup was built which worked very well without being too obtrusive.

The client also wanted some side gates built for the house using the same design as the existing front gates. These are described in another post.