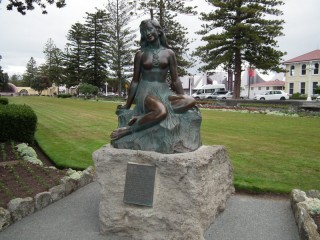 Pania of the Reef - Napier

On a recent trip to Napier in New Zealand to admire the Art Deco buildings of the city I discovered this famous statue known as “Pania of the reef”. It is located in the park by the seawall opposite the Masonic Hotel.

The legend of Pania

On the base of the statue is a brass plaque. The inscription on the plaque reads;

“PANIA OF THE REEF”

“An old Maori legend tells how Pania, lured by the siren
voices of the sea people, swam out to meet them.
When she endeavoured to return to her lover, she was
transformed into the reef which now lies beyond the
Napier breakwater.