A plaster mould is the easiest and cheapest of all moulds to make. They are also the heaviest and most fragile. There are two basic ways of making them. The method described here is to use plaster bandage which is normally used to set broken limbs. The other method is to pour the plaster into a mould which is described in the post on Plaster Mould Making.

A plaster bandage mould is useful when taking moulds of body parts because it dries quickly and has no harmful solvents. Plaster bandage can also be applied directly to an object without having to make special dams or walls to contain it. To save money it can also be used as a support jacket in lieu of fibreglass when making a latex mould. 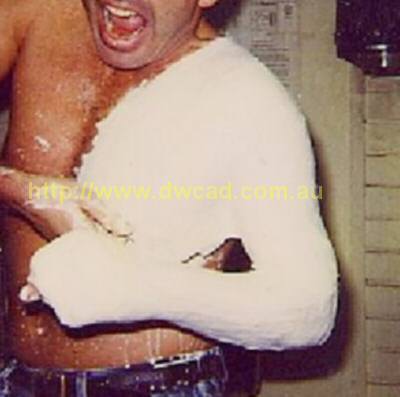 Who forgot the mould release?

For the purpose of description we will take a plaster cast of a foot. You need to put a release agent onto the skin to prevent the plaster sticking on skin or hairs. Even though it’s messy, petroleum jelly is the best to use. Even if hairs get caught in the dry plaster they can slip out without too much agony.

You can see in the photo of an arm mould that it *is* agonising removing a plaster mould if you forget this important step.

Get a roll of plaster bandage, dip it in a bowl of water and start laying it on the foot, fold on fold. Rub the bandage to make the plaster soften and mix through the bandage. As the layer gets thicker keep kneading the bandage down and around the foot to ensure the plaster and the bandage get into all the crevices. Repeat this until the plaster and bandage are about half an inch thick. Keep smoothing it with your hands until you feel it getting warm and hardening.

Take extreme care not to plaster all around the foot (or anywhere else!) otherwise you will not be able to remove the mould. After it has hardened sufficiently carefully pull the mould from the foot while it is still a little flexible. Feet are a bit soft and flexible as well so you shouldn’t have a problem.

You can now make casts from the foot mould. Make sure you seal it with shellac so that mould release doesn’t soak into the plaster. Plaster bandage is a super quick way of making a mould where you don’t need a lot of definition. It also makes a good support jacket for alginate moulds of the face for example. Dental alginate sets quickly (minutes) and captures very fine detail. They are also very weak and need a support jacket. Plaster bandage is ideal because it can be applied directly, sets quickly and has no harmful solvents.