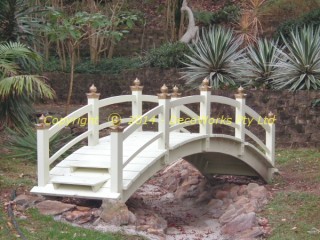 Japanese bridge for the garden

Here is the completed Japanese bridge for a gully garden. The most complex task in building the bridge was making the bridge arch. Treated pine was used throughout to make the Japanese bridge with the timber having two coats of timber preservative applied after it was assembled to ensure a long life being exposed to the elements.

Two small steps were built on either end of the bridge to make it easier to step on and off the bridge. Due to the curve of the arch the Japanese bridge was a little steep at both ends hence the need for steps. 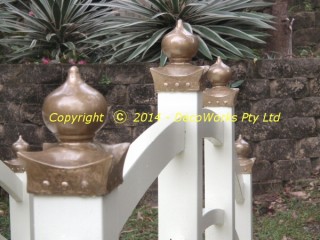 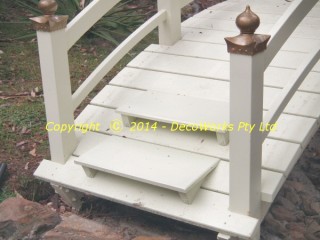 The next step in the construction of the decorative Japanese bridge is to build concrete footings in its required position in the garden. The two main arch supports were first joined together to form the basic bridge structure. This was then braced with steel and fitted with steel support brackets on the end of each arch section. These brackets will be set into the concrete footings as shown below.

Several days later after the concrete had cured sufficiently the Posts and rails were bolted to the arch with stainless steel bolts. It is important to lubricate the stainless steel bolts to prevent galling (or cold welding) of the nuts. I used Loctite 771 which also has nickel additives which is best for stainless bolts.

All the bridge parts had previously been painted with timber preservative to offer long term protection against fungal and insect attack. A final two coats of oil based enamel will be applied to all timber parts before fitting of the base planks. 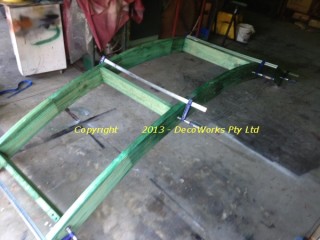 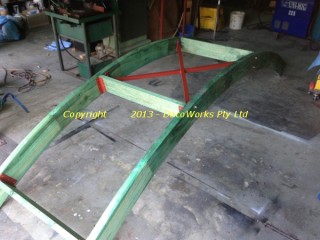 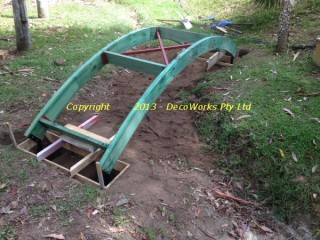 Setting bridge arch over holes for the concrete footings. Steel brackets attached to the arch extend into the holes. 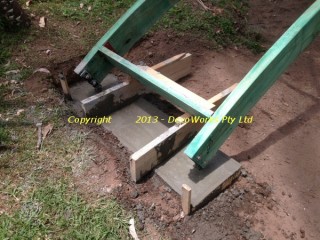 Concrete poured into bridge footing holes. Pieces of wood hold the bridge at the correct height until the concrete sets. 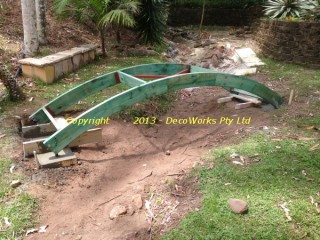 Concrete footings for the Japanese bridge completed. It will need several days to cure properly before any further work can be done. 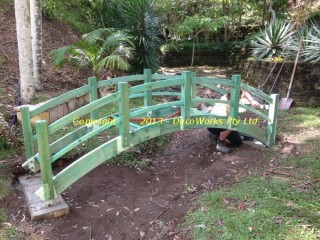 After the concrete footings had cured the posts and rails were attached to the arch sections with stainless steel bolts.

The next step of making the Japanese bridge posts and rails has now been completed. The rails are curved and have been cut to be concentric with the curve of the main bridge support arch. They are fitted between the five bridge posts using mortise and tenon joints. The mortises were cut using a chisel mortiser machine which saved a lot of time.

After they have been painted with a timber preservative the posts and rails will be bolted to the main support arch using 10mm stainless steel bolts. These will ensure a corrosion free life from moisture and the chemicals used in the H4 treated timber used to construct the bridge.

The next step will be fitting cross members to join the two arch sections together (including the posts and rails) in readiness to fitting the floor planks. Before the are attached to the bridge, steel supports have to be made that will support the bridge at each end in concrete footings. This has more to do with keeping the weight down until the bridge has been mounted on its footings. After the concrete has cured the planks can be fitted. 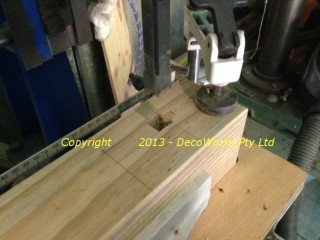 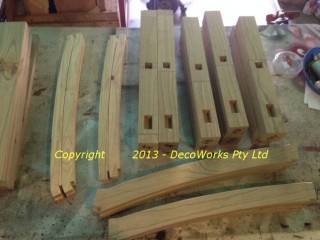 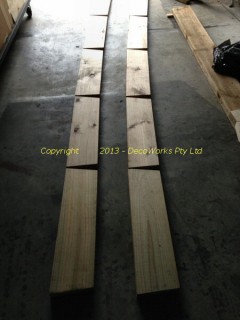 The Japanese bridge main arch was the trickiest item to build. It was important to have the timber grain following the curve of the main arch as closely as possible to ensure a strong structure. This was achieved by dividing the arch into five sections, joining them with dowels and then cutting the final curve.

By using this method the weight of the bridge will be spread across the angled sections of the arch and, with the addition of an aluminium band secured under the arch section with stainless steel screws, ensures a very strong support for the final structure.

Each section of the Japanese bridge main arch was joined together using five 13mm Tasmanian Oak dowels. A special jig was made (see photo below) to ensure the correct alignment of the holes prior to assembly. Due to the length of the arch (over three metres) the joining process was done one section at a time. A car jack was used to clamp each joint together while the glue dried.

Now that the Japanese bridge main arch sections are finished work will start on cutting the curved handrails and supporting posts. This will be the subject of another post. 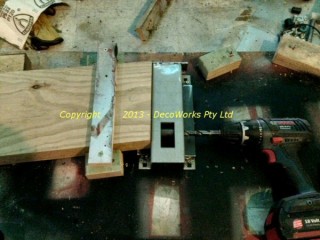 Drilling the dowel holes using a custom made jig 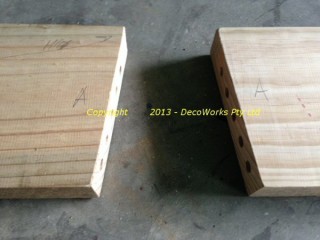 View of the dowel holes prior to assembly 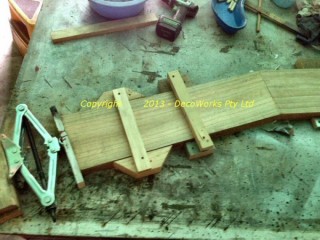 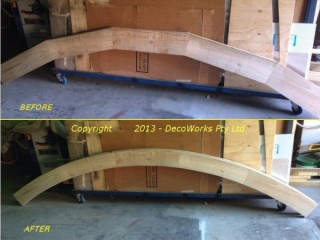 Japanese bridge main arch before and after shaping.