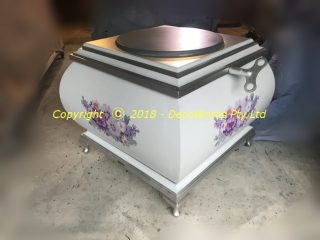 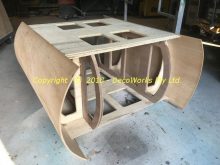 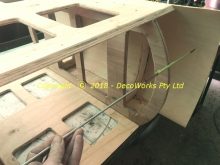 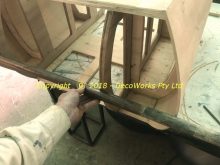 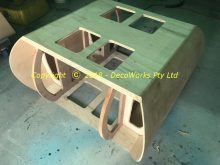 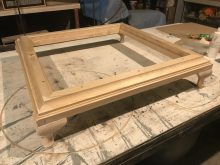 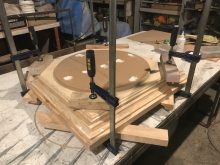 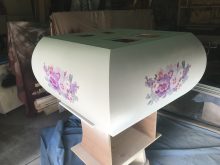 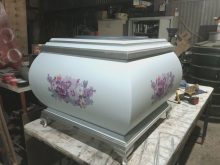 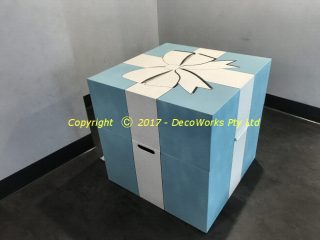 A dance prop in the form of an oversize Tiffany style gift box was required for a competitive dance routine. The box was to be big enough to conceal the dancer inside and light enough so it could be carried onstage for the routine with the dancer inside. It also had to be strong enough on the top so the dancer could perform her routine on the lid.

For rigidity the dance prop frame was constructed using 12mm hollow square steel with extra braces in the base and lid sections for additional support. To keep the weight as low as possible it was clad in 7mm marine ply which was liquid nailed to the frame. Small hand cutouts were cut in the sides to enable it to be carried and a small lip attached to the front of the lid to make opening it easier.

When the dancer burst out of the oversize box by throwing open the lid it put considerable stress on the lid stays. These were custom made using 3mm flat steel to stop the lid opening too far so the dancer to get out and close it easily. Another 30cm square wooden replica of the oversize box was built to act as a step to facilitate the dancer stepping up onto the closed lid. This was incorporated into the routine to make the transition as seamless as possible. 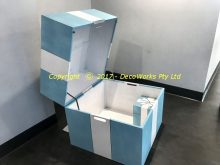 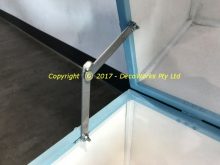 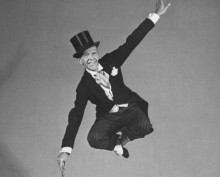 Watching Fred Astaire make a dance prop seemingly come to life in a scene is testament to his imagination and skill as a performer. A dance prop is in important element in any film or theatrical production and there was no greater exponent in the art of using them than Fred Astaire. He was able to bring the most mundane objects to life in his dance routines. Who can forget him partnering with a hat rack dance prop in “Royal Wedding”?

One of the most ubiquitous props in theatre is a walking stick or cane. Here is a clip from “Blue Skies” in which the cane dance prop takes on a life of its own in the deft hands of Fred Astaire. How the cane flies from the floor into his hands remains a mystery to me however his tap dancing still demonstrates the pure talent that was Fred Astaire. Long takes, minimal cuts and the clever use of a dance prop cane and mirrors make this clip a joy to watch.

This Youtube video can also be found at “youtube.com/watch?v=IFabjc6mFk4”. 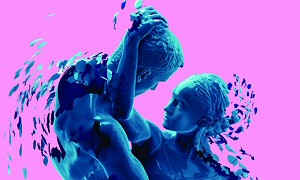 Two new works from the Sydney Dance Company premiere on March 23rd 2010. The first work by Rafael Bonachela, “6 Breaths”, is set to a newly commissioned score by Italian composer Ezio Bosso. The second, “Are We That We Are”, is a physical exploration into the existence of altered states of consciousness within human experience created and performed in by Adam Linder. The costume designs were realised by Jordan Askhill.

The costume props for the production were produced by DecoWorks in close collaboration with the designer.

Below is a short video excerpt taken from the production.