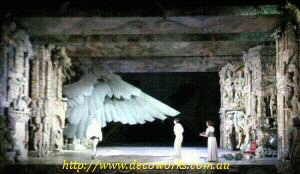 A large wing mechanism was needed to extend on stage from the side of the set as shown in the photo. A wing mechanism was devised by David Wilson which could be extended onstage 6 metres and, when stowed, occupy a space of less than 90cm wide.

By mounting all the blades of the wing mechanism on a single extendable pivot point the desired effect was obtained. To reduce weight foamcore board was used for the wing blades. The wing naturally fell closed under gravity and by pulling a rope it extended out quickly as required.

Below sections of the CAD drawing made showing the four blade layers in different colours. The blade layout of the first and subsequent layers can be clearly seen in the construction photos shown. 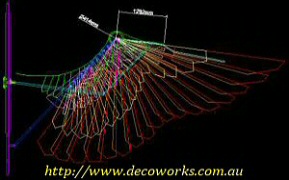 The wing blades were first drawn on CAD to work out the best configuration for the required operation. 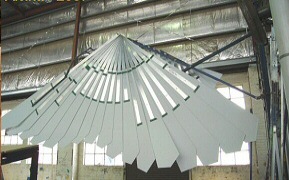 Back view of the first layer of wing blades during construction. 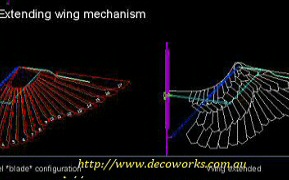 This drawing shows the wing in the open and closed position. This was adjusted many times before a working configuration was found. 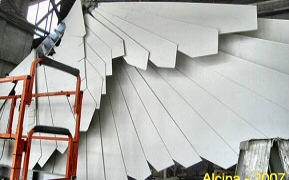 Here the layering of the wing blades is evident.