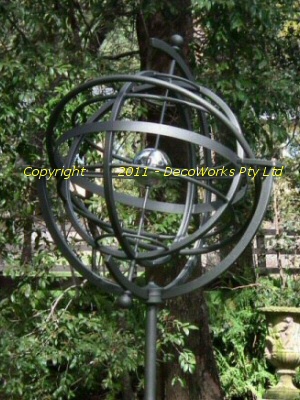 The armillary sphere (from the Latin "Armillae", or ring) is a representation of the celestial sphere with the Earth at its centre. It was used by ancient astronomers to describe the motions of the stars and planets across the sky relative to the Earth.

Around all these rings lies the ecliptic ring which is divided into the twelve signs of the Zodiac. This is because it represents the path of these constellations across the sky relative to the Earth. Strictly speaking there are 13 constellations around the ecliptic - Ophiuchus is usually omitted.

Supporting these armillae is a vertical ring called the meridian ring which is divided into 360 degrees. This in turn sits inside the horizontal horizon ring. 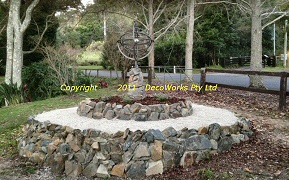 This large garden armillary sphere has outer rings measuring one metre in diameter. The inner sphere measures 720mm in diameter with a 150mm diameter stainless steel sphere representing the Earth inside. They can be made to any diameter required or the design can be simplified to suit your budget.