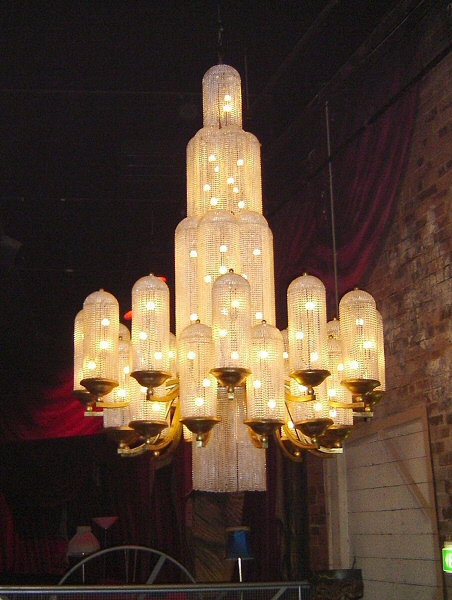 A large 3 metre tall Art Deco chandelier designed by Georges Chevalier was the centrepiece light fixture in the Baccarat/Christofle pavilion at the 1925 "Exposition Internationale des Arts Decoratifs et Industriels Modernes" in Paris. (see below) More information about the original chandelier gives some of its history

The Art Deco chandelier was sold after the exhibition and sent to Australia where it was installed in the foyer of the Regent Theatre in George street, Sydney (see photo below). The Regent opened in 1926 and was demolished in 1990.

Measurements were taken of the original Art Deco chandelier which had been dismantled and stored in a basement after its removal from the Regent Theatre. From this information construction drawings were drafted to build the replica.

The original was made of brass. In fact much of its construction used parts and techniques from the gaslight era. The replica was made using steel as the main skeleton which then supported the beading sections. David made the basic steel structure and electrical wiring and supervised the stringing of the 1km of plastic beading used in lieu of lead crystal drops.

For ease of transport to the Metro Theatre the chandelier was designed to break into three main sections consisting of the 12 arm bottom section, the middle core and the top core. These fitted into each other and secured with bolts. Once transported to the theatre it was assembled in a large gantry frame that had been built especially to house the chandelier on its side.

Many years later the chandelier was relocated to hang above the stairwell of the theatre. It looked far better in this location. 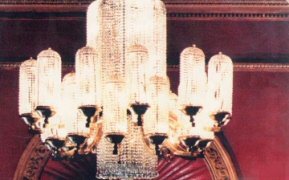 This is the reference photo of the original Regent chandelier. 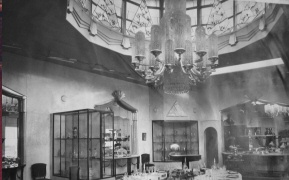 Here is a picture of the Regent chandelier in the Baccarat Pavillion at the 1925 Paris exhibition. It was built originally for the exhibition. 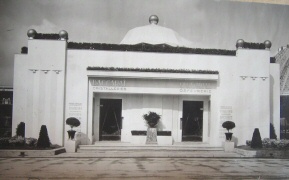 Exterior shot of the Baccarat Pavillion at the 1925 exhibition